As Rich sails across the world’s oceans he will not see the thousands of fish species living in the waters far beneath his boat or the smaller prey... END_OF_DOCUMENT_TOKEN_TO_BE_REPLACED

I grew up on a farm and was always interested in what was in the water in the ponds, rivers and swampy areas. I also loved going to the coast and... END_OF_DOCUMENT_TOKEN_TO_BE_REPLACED

Each expert will answer questions during the race. Click here to submit yours! END_OF_DOCUMENT_TOKEN_TO_BE_REPLACED 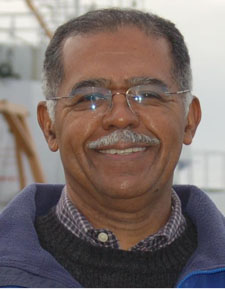 I was born in Annapolis, Maryland, but grew up on my family’s farm in Orrum, North Carolina. As an only child I had a lot of time to explore nature and the environment around me, from the farm animals to swamps and woodlands. Three of my uncles had gone to college to pursue agricultural degrees, and several of my aunts were elementary and high school teachers. I returned to Annapolis to attend Wiley H. Bates High School, where my interest in science really became a major focus in my life. My high school biology teacher, Miss Mamie H. Glenn, made everything exciting and fun, yet she had high expectations for her students. My Boy Scout leader, Mr. Dallas G. Pace, who was also my chemistry teacher, was also a major influence. At that time in the U.S. it was all about space exploration. Science became the career path for many students, including me.

I attended what is now the University of Maryland Eastern Shore (UMES) knowing I wanted to be a biology major. I didn’t change my mind. I worked as a lab assistant in the biology department and helped faculty with their research projects, from washing dishes to setting up petri dishes for experiments. I took an ecology course, which wasn’t a popular subject back then, and together with all the other science courses I gained a broad science perspective. Dr. Marion A. Richard Myles, a plant physiologist, conducted research on germinating and root-tip elongation of fava bean under various conditions. She had confidence in me, and allowed me tremendous independence to be involved in her research and to see how data was collected and analyzed. It wasn’t until graduate school that I really appreciated that experience. I graduated in 1965 with a degree in biology and a minor in chemistry.

After two years working as a chemist in industry, I received a call from a former UMES professor to talk with a professor at Oklahoma State University. I did, and was lucky to receive a fully paid research assistantship in the newly established cooperative fishery unit at OSU, where I received a master’s degree in 1970 and Ph.D. in zoology in 1975. Since 1978 I have been a fishery biologist at the Woods Hole Laboratory of NOAA’s Northeast Fisheries Science Center, and currently serve as Director of Academic Programs.