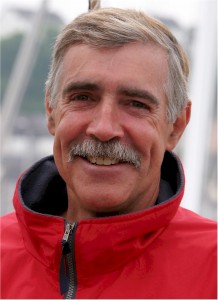 See the 21 minute film “Go Around Again” on Rich Wilson

Rich Wilson was the only American entrant in the Vendée Globe 2008-9, finishing 9th of 11 finishers of 30 starters aboard Great American III. At 58 years old, he was also the oldest skipper in the fleet. He was the second American to finish the event (Bruce Schwab finished 9th in 2004 aboard Ocean Planet).

A Boston, Massachusetts native, Rich considers himself a professional educator, a sailor and adventurer. With graduate degrees from Harvard Business School and MIT,and a college degree from Harvard, Rich was a math teacher in Boston, a Trustee of both the Sea Education Association and The School for Field Studies (a Content Partner for sitesALIVE!), and an Overseer of the Boston Museum of Science.

Most importantly, Rich founded sitesALIVE! (www.sitesalive.com), a non-profit organization to connect K12 classrooms to adventures and expeditions around the world. Believing that an ocean voyage, with its drama, uncertainty of outcome, and vast breadth of content, would make an ideal event from which to create a “learning adventure” to excite and engage students in Science, Geography, Math and History, Rich created the project Ocean Challenge Live! in 1990. He and one shipmate would challenge the clipper ship record set by Northern Light in 1853 during the Gold Rush from San Francisco to Boston by way of treacherous Cape Horn. They would be linked by newsletter and radiotelephone to schools during the 15,000-mile non-stop voyage.

Their voyage around Cape Horn would become part of maritime lore. Four hundred miles short of Cape Horn, driving under bare poles for three days in seas that built to 65 feet (official estimate), the 60′ trimaran Great American capsized on Thanksgiving Day. In a first in recorded maritime history, the massive trimaran was then re-capsized and thrown upright by the sea an hour later. Seventeen hours later, in a dramatic midnight rescue, the giant containership New Zealand Pacific rescued Rich and shipmate Steve Pettengill.

Returning to Boston after an 18-day voyage aboard NZP to Holland, Rich visited a dozen schools that had participated in the “learning adventure”. The effect of bringing his real world survival story into classrooms was so stunningly effective, that Rich decided to try for the record again in 1993. He and shipmate Bill Biewenga succeeded in that voyage aboard the 50′ trimaran named Great American II, in honor of the trimaran whose massive strength saved his and Steve’s lives in the double somersaulting capsize off Cape Horn.

More importantly, two new distribution channels for the Ocean Challenge Live! school program had been developed. 12 major market newspapers (including the Los Angeles Times, San Francisco Chronicle, Boston Globe, Philadelphia Inquirer, Detroit News, Denver Post, etc.) had agreed to publish, by their Newspaper in Education departments, a 12 part series of features written by Rich and Bill from Great American II at sea. These features were written on the weekly topic in the Ocean Challenge Teacher’s Guide, so that the teachers would have some ‘live’ content to augment the classroom activity. The Newspapers would market the program to teachers in their area, and then, each week on the day of publication of the Ocean Challenge Live! feature, would deliver 30 newspapers to the teachers who signed up. This provided the connection for the classrooms to the adventure.

And Prodigy, then the largest proprietary online service in the US agreed to produce Ocean Challenge Live!, the first truly interactive learning adventure. 100,000 adults and 100,000 kids followed regularly online, asking 200 questions per day (on average)!

Upon Rich’s return, PACT95, an America’s Cup syndicate, contacted Rich and Ocean Challenge, Inc. to create and produce an education program like Ocean Challenge Live! for the Science & Technology of the America’s Cup. Rich was Education Director for that America’s Cup syndicate. The program was published in 27 NIE programs, reaching 21 million readers and 300,000 students weekly for 11 weeks, and with a pioneering website on the new, fledgling Internet in January 1995.

At the same time, the American Sail Advancement Program, similarly seeing what Ocean Challenge Live! had done, sponsored Rich and his team to produce a program to promote awareness of sailing. Ocean Challenge partnered with Class Afloat, a high school class taking a full year of academic studies aboard the tall ship Concordia, while sailing around the world, to provide content from their round-the-world voyage for a curriculum in US schools of Geography, Social Studies, World History, and more. This program, Class Afloat Live! continued, live and interactive, each year for 10 years.

Over the next decade, many more programs were produced under the new umbrella brand name of sitesALIVE! 75 programs, each a semester long, live and interactive, and curricular based, were produced. Ocean Challenge, Inc. turned into sitesALIVE Foundation, Inc. in 2002. All of the programs can be found archived at www.sitesalive.com, under the menu item “75 Past Expeditions”. Rich’s mission is simple: excite, engage, and teach students.

Rich’s achievements, both in and out of the water, include:
2004 – The Transat: Plymouth — Boston:
Great American II; Class 2 Multihulls, 2nd place, 15 days, solo

One of Rich’s most treasured honors is the 1997 Scientific American’s Young Reader’s Book Award for his book “Racing a Ghost Ship”. The book recounts the stories of the Great American and Great American II voyages from San Francisco to Boston.