Most people go about their daily lives never thinking about how the goods they use every day end up in their home.  World trade is bigger today than... END_OF_DOCUMENT_TOKEN_TO_BE_REPLACED 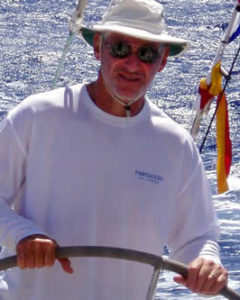 Rich du Moulin’s love of yacht racing and his career in the shipping industry indicate the depth and breadth of his passion for all things maritime. Rich has competed at all levels of sailing including four America’s Cup campaigns, four Transatlantic Races, Transpac, Sydney-Hobart, Fastnet and 24 Newport-Bermuda Races.

Rich holds a Bachelor of Arts (1968) and a Bachelor of Engineering (1969) from Dartmouth College. He served three years in the Navy as a Lieutenant stationed at the Naval Academy in Annapolis. One of Rich’s duties was Ocean Racing Coach training Midshipmen in seamanship, navigation, and leadership. As a member of the Fales Advisory Committee, Rich continued to assist the Naval Academy.

After the Navy, Rich joined the crew of the top ocean racing sloop Charisma which he navigated through a hurricane to first in class and second in fleet in the 1972 Newport-Bermuda Race. He then skippered her in the Transatlantic Race to Spain and went on to Sardinia to win the Sardinia Cup. Rich then attended Harvard Business School and received an MBA in 1974.

Rich’s “other” maritime career began when he entered the shipping industry. He spent 15 years at Ogden Marine Inc. and departed in 1989 to purchase Marine Transport Lines (MTL), the oldest shipping company in America, founded in 1816 by the Mallory family of Mystic, Connecticut. The Mallorys also founded the famous Mystic Seaport Museum. It is fascinating that MTL was one of the leading builders and operators of the famous clipper ships that served the California Gold Rush starting 1849! In 1993, Rich Wilson’s Ocean Challenge made its first record attempt on this famous trade route around Cape Horn. In 2003, Rich joined Rich Wilson aboard Great American II to challenge and beat the 154 year old record of the clipper ship Sea Witch from Hong Kong to New York.

In 2001, Rich sold MTL to Crowley Maritime, another great American shipping family. With his longtime business partner Mark Filanowski, Rich opened Intrepid Shipping in Stamford, Connecticut (renting space from his friend Charles Mallory, a direct MTL descendent). Mark is kind enough to carry the load at Intrepid while Rich is at sea.

Rich lives in Larchmont, New York, quite near his Larchmont Yacht Club. Rich is a member of the Cruising Club of America, Royal Ocean Racing Club, New York Yacht Club, and served as Commodore of the Storm Trysail Club. On behalf of the Junior Sailing Association of Long Island Sound and the Storm Trysail Club, for the past twenty years Rich has organized Junior Safety at Sea Seminars that have trained over 4000 kids in big boat handling and man overboard procedures. This ties in nicely with Ocean Challenge’s outreach to young people. Rich Wilson has been a frequent speaker at these seminars that have morning classroom activities and afternoon practice on 20 borrowed big boats.

Rich du Moulin is also a regular competitor in international team racing events, captaining winning teams in the Patriot’s Cup in Newport, the Sigma Cup in Hamble (UK), and was a skipper for runner-up New York YC at the Hinman National Masters Team Racing. Recently Rich missed winning the International Masters Sailing Championship by one point. In the past eight Newport-Bermuda Races, Rich and his double handed partner Chris Reyling have four firsts and three thirds. Twice they have won the DHORT – Double Handed Ocean Racing Trophy.

Rich’s wife is Ann, and they have four grown children all of whom are sailors. Sons Edward and Mark raced with Rich aboard the famous Carina in the Transatlantic, Fastnet and Sydney-Hobart races.

Rich’s father Edward was also a sailor of note, having managed four America’s Cup campaigns, three for Dennis Conner. Mr. du Moulin was elected to the America’s Cup Hall of Fame, and sailed his 42 foot cutter Lady Del until his last year at age 91.

Rich’s community and board activities are all oriented to maritime heritage and the safety of mariners at large. From 1996 to 1999, Rich was Chairman of Intertanko, the international body representing the tanker industry. As such, he was an outspoken advocate for safety at sea and environmental protection. The US Coast Guard awarded him its Distinguished Service Medal, while the industry awarded him its highest honors, the Commodore Award and the AOTAS (Admiral of the Ocean Seas). Rich served on the board of the American Bureau of Shipping and was a trustee of the National Maritime Historical Society. He is presently chairman of the Seamens Church Institute of New York and New Jersey, which provides chaplains to visiting ships, legal advocacy for mariners without access to counsel, and bridge simulator training to the pilots and deck officers of inland tugs and blue water merchant vessels. Rich also serves on the boards of three shipping companies: Tidewater, Teekay Tankers, and Pangaea Logistics.