Rich Wilson, on his asthma…

I’ve had asthma since I was a one year old kid. And when I was growing up there weren’t any medications available to help when I got an asthma attack. When I was seven, the first asthma inhaler came out. It looked like a turkey baster, with a rubber bulb at one end, a bunch of chambers in the middle, and an opening at the far end. My Mom would use an eyedropper to drip medication into the chambers, then she’d squeeze the bulb and it would blow the air through the medication and make a mist that I’d inhale. Amazingly this contraption helped and that’s why I remember it so clearly.

It was really hard to keep up with my friends when we were playing outside or playing sports at school. My friends didn’t really understand my asthma, but that wasn’t their fault, because they didn’t have asthma, and if you don’t have it, you can’t understand it.

I didn’t want to be left out of the games, so I just tried unbelievably hard to keep up. I think that in a strange way, this toughened me up, mentally, because I just wouldn’t quit no matter how much I was gasping for breath. 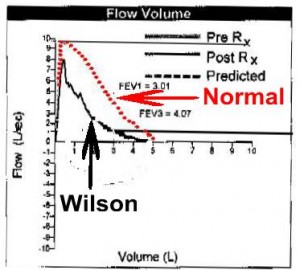 I was allergic to leaves, grass, trees, flowers, my sister’s cat, all dogs, dust in the house in the winter, wool blankets and rugs, smoke, it seemed like just about everything, I was even allergic to eggs, grapes, peas and chocolate! And a peanut butter sandwich? That could have killed me.

Sometimes, when people with asthma grow older, they grow out of it, but I didn’t. So what I began to realize was that if I was going to be stuck with this I had better get really smart about it. I had to really pay attention to what caused my asthma, and try to avoid those things. I had to be a scientist about my own body, because even if I saw my doctor twice each year, for a half hour, that was only an hour each year. But I had to live in my body for the whole rest of the year, he didn’t. So I had to be smart and help him to help me with my asthma. 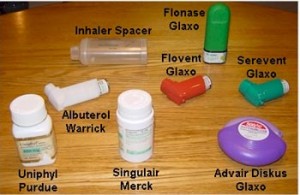 And that meant that even though the schedule for taking the new medications as they became available seemed overly complicated, and it seemed as though I just spent all day every day attending to my medication schedule, doing that meant that I could do the other things that I wanted to do.

My birthday is April 19, which here in Boston is Patriot’s Day, when Paul Revere rode to warn that the British were coming. The Boston Marathon is run on Patriot’s Day. We lived outside of Boston, just a block from the famous “Hills of Newton” that seemed to make or break runners in the race. I always dreamed of running that Marathon, on my Birthday. And so, gradually one year, I began to run a little bit, then a little bit more, huffing and puffing, then some more. I had to strengthen myself, both for my legs and for my lungs. It hurt, but little by little, I got to run further, and eventually I ran a 3 mile race, then a 5 mile race, then a 10 mile race. Then I began thinking, hey, maybe I can do this and really run the Boston Marathon. And eventually, in 1982, I did run it and I finished, and then I ran it three more times. I’d run with an inhaler tucked in the waistband of my running shorts, just in case, but I hardly ever used it. 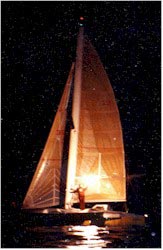 The confidence that I gained by those efforts was what started me thinking about doing the long distance sailing that I’ve done in the last 10 years. When I was growing up, I read and dreamed about the great solo sailors – the American Joshua Slocum, the Englishman Francis Chichester, the Frenchman Bernard Moitessier. I always wondered whether I could do what they did, could I be as strong, as brave, as smart as they had been? I didn’t know, but I wanted to try.

And, to make a long story short, in 1988 I raced the solo sailing race across the Atlantic Ocean 3,000 miles alone. It took me 21 days, and I won my Class in the race. I had accomplished my goal. My asthma had not gotten in my way, because I managed it just like you manage a storm at sea, you collect information about it, you study the information, you come up with a game plan to deal with it, and then you execute your game plan. And it’s the same for asthma, you pay attention to your Peak Flow Meter, you think about what causes asthma for you, you tell that to your doctor so he or she can give you the right medications, then you take your medications on the right schedule, and you go do the things that you want to do.

My asthma hasn’t gone away, so I still pay attention to my Peak Flow Meter, and I still take 4 medications every day to keep my asthma under control, but what I have learned is that if I am smart and disciplined about my asthma, then I can live with it and do the things that I want to do.

So here we are again, with another dream in front of us, Vendée Globe 2016. We’ll go day and night, non-stop, 24,000 nautical miles, flat-out aboard Great American IV for ~15 weeks. I’ve got my medications ready, but they are just a part of my day now, like having breakfast, no big deal, that is if I keep up my discipline.

And so I say to you kids who have asthma, be a scientist about your own body so that you can tell your doctor what triggers your asthma, clean up your room so it doesn’t collect dust, and get outside and play sports or be active so you can strengthen your body and your lungs. And most importantly, here’s the key, keep dreaming the dreams that you have. And one day it can be for you just like it is for me, you yourself will be managing your asthma, you’ll get a chance to tackle those dreams, and your asthma will not get in your way.

Wish us luck, we’re off to tackle another dream. And we invite you aboard with us here online at Ocean Challenge Live!