How does the speed of the Great American IV compare to the speed of motor boats the same size, or L’Hermione?

Hello Ellen:  The speed of motor boats depend on their engine’s power (it’s like cars: normal cars or racing cars are not the same).... END_OF_DOCUMENT_TOKEN_TO_BE_REPLACED

The sea and man. Thousands of years ago, the first sailor that saw land disappear must have been struck by a feeling of immense solitude and a... END_OF_DOCUMENT_TOKEN_TO_BE_REPLACED

How do you know where you are when the GPS doesn’t work?

When the GPS does not work, In view of dry land: we use the nautical chart and daymarks or noteworthy objects that you can pick up from dry land and... END_OF_DOCUMENT_TOKEN_TO_BE_REPLACED

What is it like to live on the ocean?

It is very different to life on dry land; there isn’t anyone around us, we are really alone; it is a moving environment unlike terra firma, so... END_OF_DOCUMENT_TOKEN_TO_BE_REPLACED 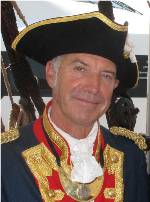 I was born in Brittany and spent my entire childhood in Cap Sizun near the Pointe du Raz.

Living surrounded by the sea, I always wanted to be a sailor, with a true passion for boats and adventure. I devoured all maritime literature and built model boats as I grew up. I first set out to sea with fishermen, for first-hand experience of the harsh realities of the sea and its secrets. I also started sailing, using traditional rigging.

I ended up joining the French navy, where I worked my way up from sailor to commandant. I learned navigation, oceanography, meteorology astronomy and manoeuvring. I steered all sorts of boats in the Indian Ocean, the Atlantic and the Mediterranean. Most of all I loved the sail training vessels. I also worked as a harbour pilot and manoeuvred huge vessels such as aircraft carriers. While training young people, I even got to captain a fishing vessel in the Caribbean.

In 2009 I moved over to the merchant navy and passed the Master Limited certificate of competency. I worked as Captain on the full-rigged French ship Belem for several years, and acquired experience navigating a three-mast heavy frigate. This ship built in 1896 is used to train about 2,000 people.

In 2012 I joined the project to rebuild the Hermione, a replica of the 18th-century frigate which took General Lafayette to Boston in 1780 to announce to George Washington that France would be helping the Americans in their War of Independence. Thanks to my commitment, hard work and experience, I was appointed commandant of this masterpiece in naval architecture; I was thus given the honour of being at the helm during its historic voyage along the east coast of the USA in 2015. I had to train over 170 volunteers to sail this ship.

Having spent over ten years working on training vessels, I am fully convinced that it is an excellent way to learn to surpass yourself and develop the best of human qualities: courage, determination, sociability and team spirit.