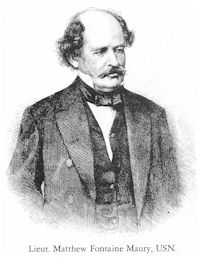 Lt. Matthew Fontaine Maury, U.S. Navy, had an audacious idea. He thought that if he collected the logbooks from captains on the great sailing trade routes of the world, and if he collected enough information from them, he could construct statistics of weather, wind, currents, temperatures, etc., that would be a superior guide to the route that a sailing ship should sail.

Over the course of a decade, he gathered 3,000 logbooks, and constructed the first Pilot Chart of the North Atlantic Ocean. The first ship that used the chart was sailing from Baltimore to Rio de Janeiro. The Captain followed Maury’s chart, and cut 17 days from the usual time for the voyage! Once other Captains heard about that, they all wanted to get copies of Maury’s Chart.

Maury was clever. He said that he would give a Captain a chart for free, if, and only if, the Captain gave Maury his most recent sailing voyage logbook. In this way Maury kept new information coming in to him, while his results were going out into the world.