Sometimes it feels lonely sailing around the world alone on a small boat on a big sea. Except Rich Wilson hasn’t really been alone.

He’s joined from time to time by other living creatures—creatures with lives as wonderful, and journeys as compelling, as his own.

Some of them flop right up on deck. Flying fish use wing-like pectoral fins to get themselves airborne, gliding for up to 655 feet before splashing back down again (or getting dumped back overboard with Rich’s help.) The fish do this to escape predators like marlin, swordfish, and tuna–who surely aren’t expecting their prey to leave the ocean, even for a short period!

Many billions of other animals float, swim, crawl and sit beneath and around and sometimes on the Great American IV. Rich has glimpsed a few of the stranger ones: squid, who can taste with their skin. Shrimp, who like lobsters, wear their skeletons on the outside instead of inside like us.

But without Rich even seeing it, he knows that creatures from whales to corals (who look like rocks but are really colonies of tiny animals) are doing extraordinary things beneath the waves he rides: Humpback whales are singing complex and beautiful songs, which they change from year to year. Crabs with hairy chests huddle near undersea volcanic vents in the icy Southern Ocean for warmth, and farm bacteria on their chest hairs which they scrape off with special mouthparts to eat. Brainless jellyfish are choosing to split into pieces to make copies of themselves.

The ocean is our planet’s largest wilderness. Yet so many of its creatures seem to us like outer space aliens, they are so different from us.

But one magnificent creature keeps Rich company from time to time, and these two have a lot in common. Both are riding the wind. Both are on epic, long-distance journeys. And both will be spending months on end without seeing others of their own kind.

The albatross has the longest wingspan of any bird—more than 11 feet for the largest kind, the wandering albatross (there are 22 species). With its snowy white body and grey wings, the bird looks rather like a sea gull crossed with a limousine. It’s a spectacular sight many mariners like Rich have enjoyed through the ages. An albatross will often follow a boat, hoping for a handout from the crew, or at least some tasty fish guts tossed overboard. So it’s no wonder that albatrosses occupy a special place in maritime lore.

Some sailors believed that the albatross carried the soul of dead sailors—and seeing one was good luck. The soul of the dead sailor, some insisted, would protect them from harm. Others though the bird was a bad omen, foretelling the death of a seaman.

The truth about these magnificent sea birds is even more amazing. Without even flapping once, an albatross can glide for hours and cover several hundred miles! No other creature can do this. The bird’s secret? It’s called dynamic soaring. They spend half their time gaining height by angling their wings while flying into the wind. They then turn back toward the sea, swooping along at speeds up to 67 miles per hour, till they catch another updraft skyward. And do it again and again, expending remarkably little energy. By studying exactly how they do it, engineers are trying to design more efficient airplanes. 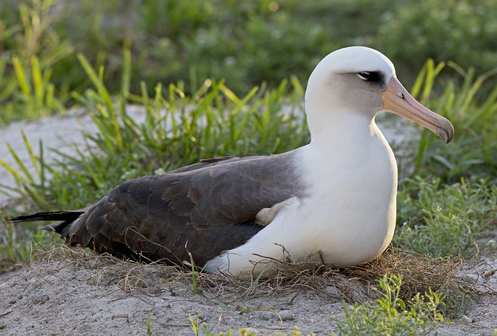 Wisdom the Albatross. Photo by Greg Joder via USFWS Pacific Region on Tumblr

Rich and his albatross friend also face a common enemy at sea. Two of the other boats in the Vendee Globe have already been knocked out of the race by “UFOs”: Unidentified Floating Objects. Smaller UFOs threaten albatrosses as well, though in a different way. Albatrosses eat mainly fish and squid, but there’s so much trash in the ocean today that many of them are eating plastic by mistake! They even mistakenly feed plastic to their babies when they finally alight and nest each year on land. We humans are such slobs with our garbage that by the year 2050, scientists say there will be more of our plastic in the ocean than fish!

Many seabirds, as well as whales, dolphins and sea turtles, choke or die of starvation with stomachs full of trash. Numbers of many of these creatures are crashing. And that makes a special albatross named Wisdom particularly important. Wisdom, a Laysan albatross (who wanders the North Pacific), is the oldest seabird in the world—and as this article is being written, she’s incubating an egg!

So Rich—the oldest sailor in the Vendee Globe race–and Wisdom, the world’s oldest seabird– have something else in common: they both are showing the world that no matter how old you are, you can still do something wonderful to enrich our precious blue planet.