Last night we alternated between the solent and genoa. The former goes better to windward, whereas the latter, if going to windward, tends to drive the boat over into excessive heel. Or at least this conflict occurs at very narrow range of wind conditions where one just doesn’t know for sure which will be better.

While setting the genoa last evening, I noticed that a pin in the staysail tack had come loose. This could have been bad if gone undiscovered, but after a few quick response minutes, we had the pin back in (thanks to the solid mallet aboard) and now have something to specifically look for as an issue. 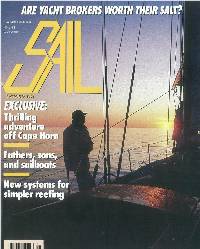 26 years ago today was a momentous event: our Capsize at Cape Horn. Many thanks again as always to my shipmate Steve Pettengill, who was an ironman in a hard situation, and to the Captain and crew of New Zealand Pacific, who executed the miraculous rescue in terrible conditions 400 miles west of Cape Horn. Chief Mate Murray Lister, aboard NZP then, is aboard with us on sitesALIVE now, and he alone can comment on rescue from his vantage point. Thanks to Captain David Watt, to Chief Mate Murray Lister, and to the crew way back then for giving us another chance to go sailing. And here we are in Vendee Globe 2016.