It’s a big day to cross into a new hemisphere. Like crossing the Equator, yesterday we crossed the Prime Meridian, watching the West longitude change to East longitude on the GPS. Now we are out of both of our comfort zones, the Northern and Western Hemispheres!

Into the night, with another blow coming, we decided to head east for a bit to let the bulk of the storm pass to our south. We sailed with two reefs in the mainsail and the fractional gennaker. In the middle of the night, we got over 30 knots of wind, not forecast, and thinking that we might therefore get even more, I decided we had to furl the gennaker and use a smaller sail. But could we do it? In a lull to the low 20s of windspeed, I went at it. Usually it’s 40 grinds at the highest load. At 30, I could do no more, and switched to a lower gear, and was able to finish the job. Then we rolled out the solent jib, and proceeded through the night, still at high speed. 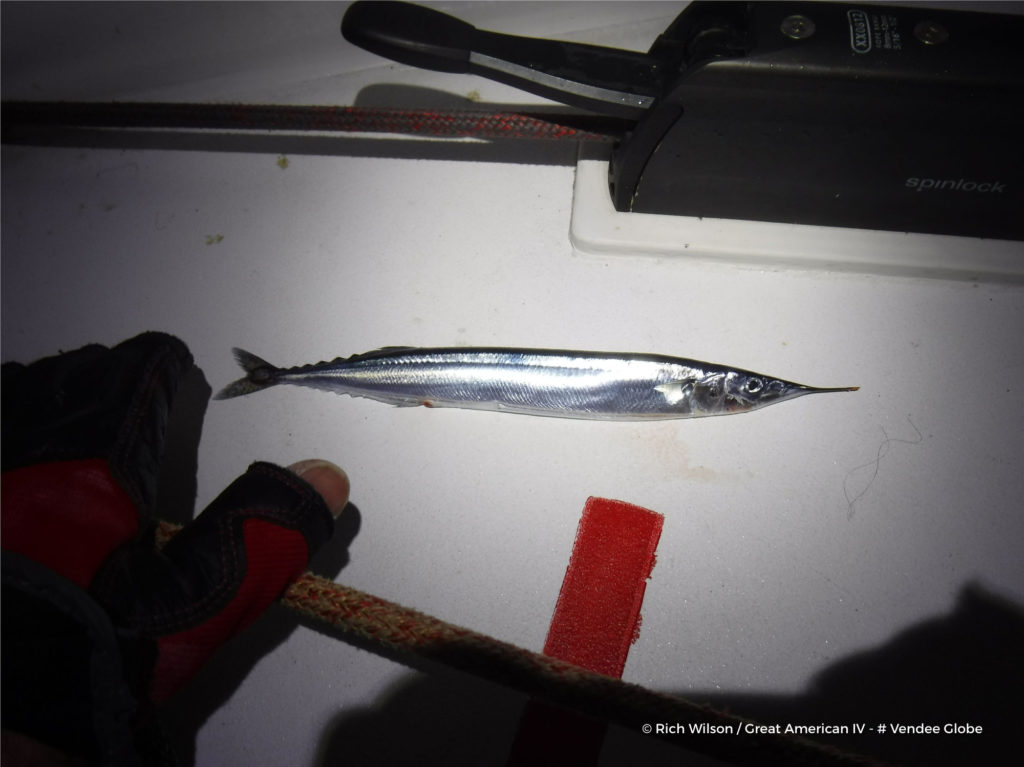 Small visitor in the night

One thing I think I’m learning is that the extra sail area often brings marginal improvements in speed, and may in fact bring unnecessary risk. So I’m beginning more and more to trust my judgment rather than the computer’s perfect theoretical equations and sail recommendations.

Also last evening came a distress signal from Cape Town Radio by the Inmarsat-C unit. It was about a sinking bulk carrier cargo ship whose position was 120 miles north of ours. The alert asked vessels in the vicinity to go to the position; there were 19 crew aboard. I called Race Management to ask if they had further information; they did not. I called the emergency search and rescue telephone in France, and they gave me the number for their counterparts in Cape Town. I tried calling them, but for some reason the number would not ring through. At this time Race Management called back, said that they had spoken to Cape Town Search and Rescue, and that I was to proceed racing, and not divert. It would have taken at least 10 hours to get back to that ship’s position. About 30 minutes later came another alert, canceling the Mayday, and that the 19 aboard had been rescued, and that the ship now was a hazard to navigation as it had not yet sunk.

I remember well the skill, diligence and commitment of the crew of the New Zealand Pacific, who rescued us off Cape Horn in 1990. I wanted to make sure that I honored that tradition to the best of our ability.