After yesterday’s replacement of a batten car on the main mast track, we got back going through the late afternoon and evening, but sailed with conservative sail selection simply because of not wanting to make a mistake while so tired. Mostly due to the time taken in the replacement, when the mainsail was up but was not pulling at all, our friend Nando Fa has sailed off and Roman Attanasio as well. Last night I did force some naps, all very short with the kitchen timer set at 20 minutes, and mostly I’d get up to look around before that went off.

We also have a situation with the hydrogenerator propeller pitch control pump, whereby it leaked all of its hydraulic oil into the box. We think the electronics are ok, but identifying which joint is the leaky one will be messy. The unit adjusts the pitch while underway to maximize power output per speed of boat, and also to take care that it does not generate too much and therefore melt the converter circuit that makes DC for the batteries out of the AC from the propeller driven alternator. 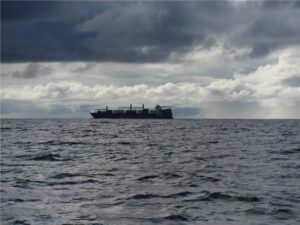 Last night we also went inside the Traffic Separation Zone at Cape Finisterre. I had planned to go outside for safety, thinking that there might be many fishing boats in closer, and there were, but they were well lit and identified by AIS (Automatic Indentification System). The inside route was shorter.

It was fun being within 5 miles of the Spanish coast! I could see the towns lit up, and of course there were 5 lighthouses that I could see also. We didn’t see the mass of ships going through the Zone until we were south of it, and angled across to the Southwest, as if going against the traffic. Yet with the AIS, we were able to pick a spot a few ships down, and make a sail for it. We went up fo the genoa and full mainsail until just a few minutes ago, when we went back to regular jib plus mainsail. Our next move will be for a reef.

Slowly we are settling into the boat at sea. I’m working on my meals for a regular schedule, and to try to sleep more. When I’m looking at our navigation software, suddenly I realize I just was asleep looking at the screen. That’s a big waste of amps! We shall see. Plus we’re gathering information from the hydrogenerator people about what might have caused that problem.