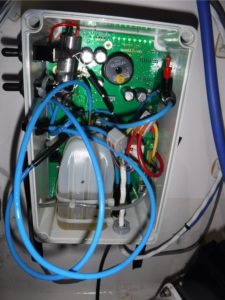 I’ve been working quite a bit the first week on our hydrogenerator, so thought I’d include a picture and more of an explanation of the issue and my fix.

The pump box of the hydrogenerator senses pressure on the propeller blades by the water rushing past and spinning it, and can automatically change the pitch of the blades for maximum ampere output, but also to protect the converter (AC to DC) from over amping and over heating.

The pitch is controlled by hydraulic system, and the tiny blue tubes carry hydraulic oil. In the upper left is the pump. One of the blue hydraulic tubes was led behind the pump, which heated apparently and melted the hydraulic tube, so that the hydraulic oil spilled into the box, until the time that there wasn’t enough to then pressurize the blades, and that control stopped.

Once I found the problem, the next challenge was how to replace that tube, as it’s all in a crowded space.

Eventually I came up with the solution (perhaps temporary, but we will see) of taking a spare piece of the black tubing, which goes from the box through the boat to the hydrogenerators at the stern, and it fit perfectly as a connection between the two pieces of blue tubing, once I cut out the melted part. We’ll see if it lasts.

I marked with magic marker at the joints of the blue and black tubing so that I could see if it was moving. So far so good. This of course was done with about a dozen emails and phone calls of consultation with Joff Brown, our technical guru, and Rob Sleep, our systems guru. 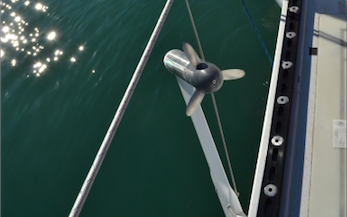 Hydrogenerator propellor, out of the water while docked