Pirates aren’t usually a hazard for Vendée Globe skippers speeding along at 20-plus knots, hundreds and even thousands miles offshore. But on Monday, as we passed the Mauritania Exclusion Zone to our east, a curious thing happened.

I checked navigation software for any AIS (Automatic Identification System) targets – nobody around. Then I went to radar, as I do occasionally, and, aha, I spotted a target four miles off the port beam. But back on AIS – nothing. I turned off the radar and turned on the radar detector, and still nothing. The ship had no radar going. I looked through binoculars and saw what looked like an old lightship: red, bizarre.

I was reminded of a weird ship encounter I had on the 2008 Vendée Globe coming north. I called a ship whose lights I saw on VHF, got no answer, and then the lights went off, so I turned out my lights. I never had an explanation. 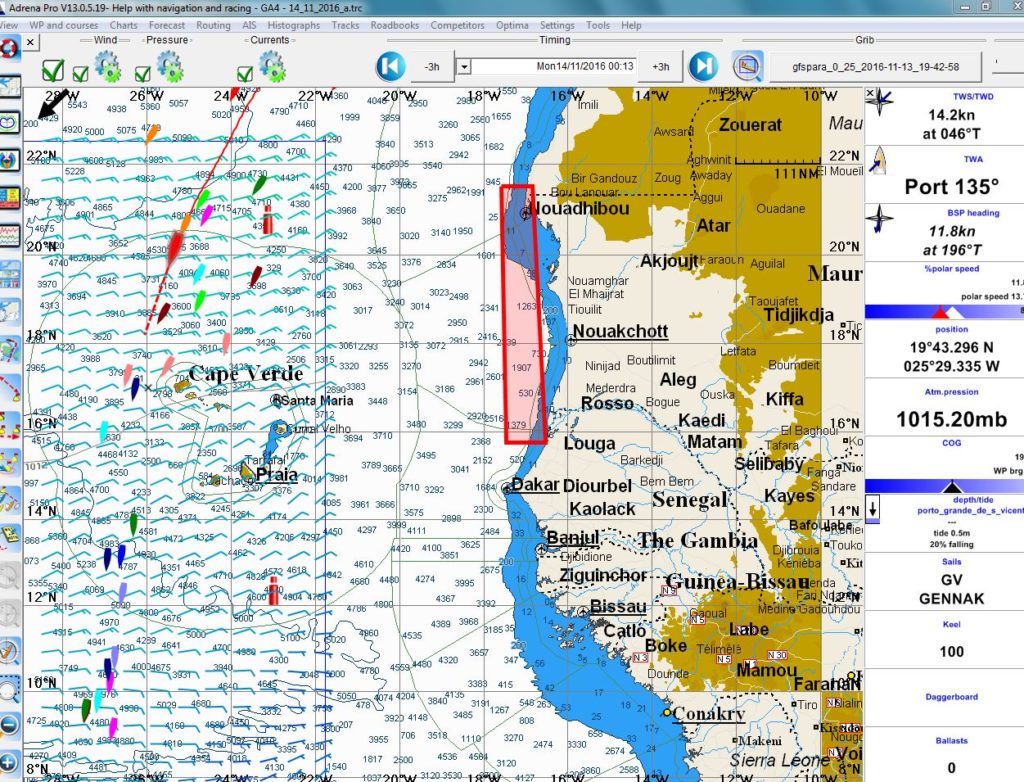 Because we’re 400+ miles offshore, we’re not targets for pirates, but those closer in unfortunately are. This year, on advice from the French government, Vendée Globe race organizers established the Mauritania Exclusion Zone, prohibiting skippers from approaching closer than 100 kilometers from the shore for fear of pirates. In addition, a few days ago, the International Maritime Bureau Piracy Reporting Centre sent us a warning of a sudden surge of pirate attacks and kidnappings along the West African coast. According to the message, vessels targeted were at berth, anchor, drifting or underway, up to 170 nautical miles from land. The message warned that pirates are armed and tend to be violent. Ships should be extra vigilant and avoid loitering close to the coast.

One of our maritime experts, Rich du Moulin, has said that if you think piracy disappeared when Blackbeard the Pirate was shot by the British Navy, you are sadly mistaken. In recent years, pirates have attacked merchant mariners, fishermen and yachtsmen in Indonesian waters and the Straits of Malacca, off Somalia in the Indian Ocean, and most recently off the coast of West Africa near Nigeria and its neighbors.

Modern pirates usually come from poor countries. Until the highly publicized attacks off Somalia (such as the one dramatized by the Tom Hanks movie Captain Phillips), the goal of the attackers had been limited to stealing cash and valuables – similar to robbing a house. Off Somalia, the game changed and pirates captured ships and crew, often holding them for years until the ransom was adequate. Maritime nations working with the UN have established a naval patrol that has stopped Somalian piracy. However, West Africa has become the latest hotbed of piracy, often more violent than before.

Murray Lister, the New Zealand sea captain who helped rescue us in 1990 off Cape Horn, has been boarded by pirates three times during his career. Every year, he says, significant numbers of seafarers are killed, captured, assaulted and imprisoned by what he terms “vicious thugs who show no mercy.” These pirates don’t even remotely resemble the romanticized movie versions. To preserve world trade, it will continue to be necessary for merchant seafarers to sail into harm’s way in vulnerable vessels, risking death, incarceration and the very real associated stress.

I think of these merchant seafarers as I sail on toward the doldrums. As Murray says, it is important to acknowledge the debt we owe them, but also take appropriate measures to ensure their safe passage – anywhere in the oceans of the world.

With contributions by Louise Bullis Yarmoff