In recording our data, I noticed that the hydrogenerators are starting to pull their weight, and also that there were not so many pedestal revolutions as previous days, and it might look as though the last 24 hours were easy – not so! There was a lot of work on the foredeck, both with the winch which doesn’t have a counter, but also simply in the dragging around of big sails and wrestling with them continually.

It is unclear whether in our conditions of light reaching we should use the masthead gennaker, a gigantic sail, but one that also pulls us a lot to leeward, or the genoa, which is as tall as the gennaker, but much shorter on the foot. We started out with the full mainsail plus fractional gennaker, which I like, but in the light conditions, we really needed to go big. I was being extra conservative because of the autopilot situation, that we thought we were getting a handle on, but have not yet completed.

I could see my friend Kojiro Shiraishi, just a few miles behind, and always gaining just a bit. So after putting dinner on, in the form of Macaroni and Cheese freeze-dried, I decided to change sails and then eat. I bore the boat off downwind completely, rolled up the fractional gennaker, unrolled the solent jib and trimmed it so that we would have at least some sail up there. Next I went forward to the mast, and lowered the fractional gennaker, wrestling it to the windward side and looping it back and forth. Next I attached the masthead gennaker head to its halyard, and hoisted it out of the forepeak, attached its tack to the bowsprit furler, attached the two sheets, hoisted into its lock, then took up on the tack. I furled the solent from the cockpit, and then unfurled the gennaker, and then wrestled and fought the fractional gennaker into its bag on the foredeck, and then hoisted that bag up and lowered it into the forepeak by the storm jib halyard. 80 minutes after mixing my Macaroni and Cheese, I had a nice dinner. 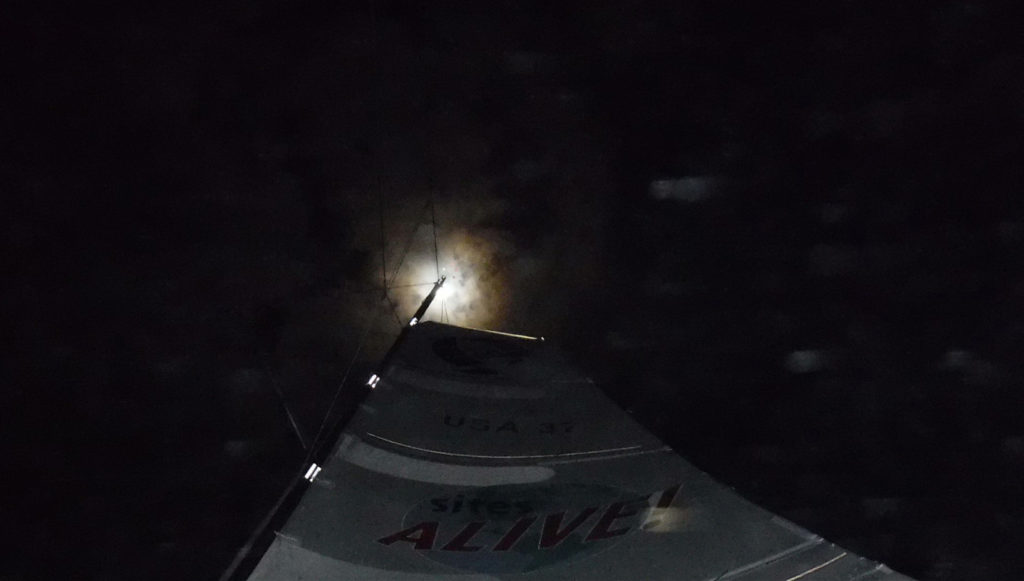 Still not really done, at midnight I went to the foredeck in the moonlight and hoisted the genoa, which is our masthead upwind sail. That effort was notable for the 15 minute fight to get the tack pin attached. So now we had 4 jibs hoisted and ready!

And this morning, I had my first shower. Salt water in a bucket to wash, and then fresh water rinse from our Solar Bag (which, when laid out in the sun, heats the water). That was delightful!