Through yesterday afternoon and into the night, we sailed stably and quite fast. We made minor adjustments to which ballast tanks we filled, or did not, and whether a reef, or not, was useful.

One aspect of this boat that is very different from our boat for Vendée Globe 2008-9 is the amount of data that is available, including the performance polars, for various conditions. Our navigation software can tell us that, according to the numbers provided by the designer, and sailmaker, that we should use X sail, and Y number of ballast tanks, with the daggerboard down Z number of meters, and the keel canted at A degrees. 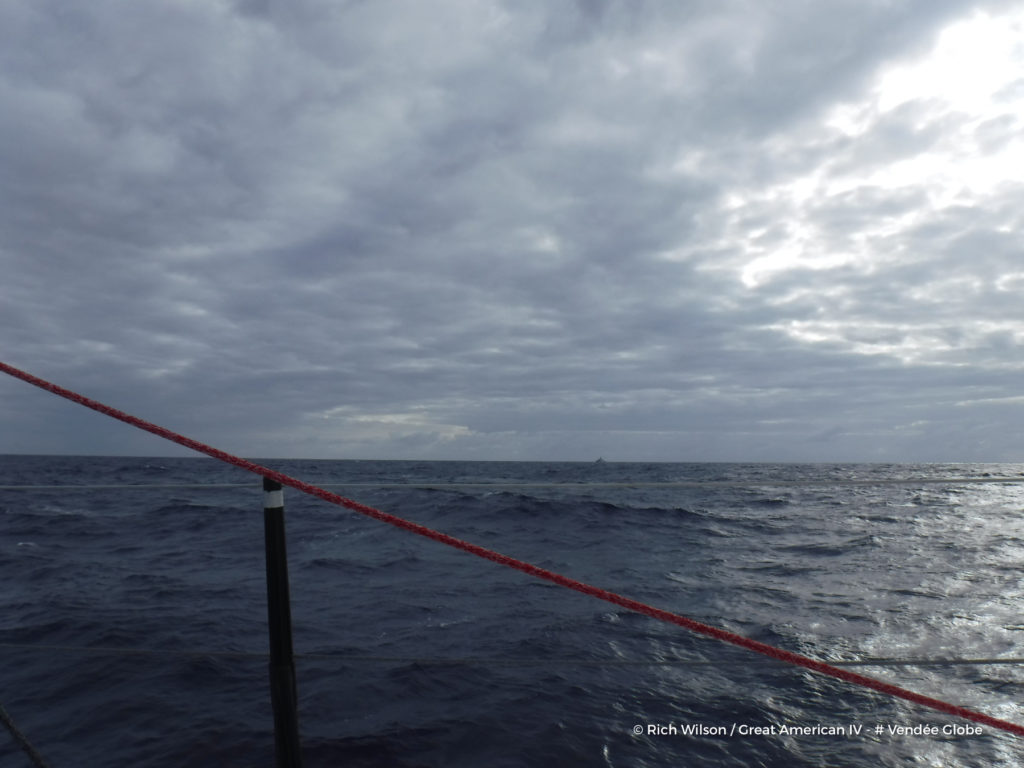 However, over the course of sailing the boat, one senses whether these numbers are so precisely correct as they seem. For example, last night the computer called for the Genoa and GV (Grande Voile = mainsail). I knew that that wouldn’t work as the Genoa is ok until 12 knots of wind, and at 13 completely overpowers the boat, and we had 13.5 knots of wind at that time. The computer flickers to the next smaller sail if we get a gust, and then shows Solent (jib) which is what we had up at the time.

The same for ballast tanks. At one time, the computer called for zero ballast tanks, but the boat was overpowered it seemed to me, so we added tanks 2 and 3 (in the middle of the boat and on the port (left) side). That seemed better. With a bit more wind we added tank 1, forward, port side. With a bit of a puff, suddenly the computer showed that we needed tanks 1 + 2. So that was good. Our senses were very close to the designers recommendations.

At about midnight, with the wind picking up very slowly, at about 15 knots, with 3 tanks in, we added 4, which was not called for by the software. It didn’t seem to slow us, and seemed to add just a perceptible amount of steering stability. But as the wind got to 16 knots, again I had the sense that the boat was laboring just a bit, heeling over at 30 degrees, going fast at 11.7 knots, but still laboring. So we put in one reef in the mainsail, reducing the heeling, the laboring, but also the power. Would we be faster or slower? It turned out just a bit faster, as we began to see 11.9, 12.1, 12.3 knots of speed.

It was all very close. It did not say that the design numbers were wrong, but they are guidelines, because there are so many other variables, including the sea state. But it shows that the sailor is the one on the spot and must make the calls according to his or her sense of the boat.