Last evening we had a Skype Video with my friends in the Finn Class of France. The Finn is an Olympic class boat, and especially difficult and physical to sail. My friend Christophe Jean sails one and is a member, and during our project development through the years, he has invited me to their annual fete which is held the first Friday of the Paris Boat Show. Through the years, I have met many of these sailors. And what a pleasure to be able to see their faces, and have a brief chat, from here in the Indian Ocean. They are all highly encouraging: ‘ We are all with you Rich!’ I will see you all next year my friends! 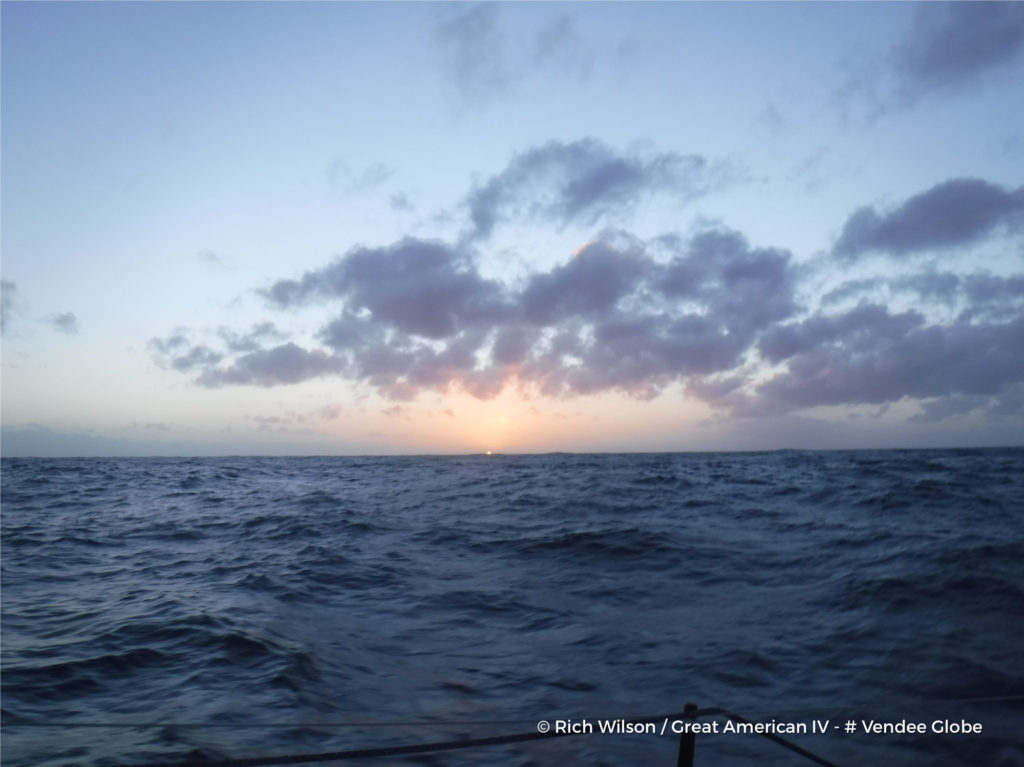 We sailed yesterday with one reef in the mainsail and the fractional gennaker, a big downwind sail. The boat was stable, and fast, and for most of the day it was quite beautiful out, although the cold has arrived, 6 degrees Celsius (42.8°F) in the cockpit.

I did a lot more work on the hydrogenerators, this time removing the leading cone on the port side unit. It is thought that perhaps the blades are stuck, and this is leading to the over pressure in the pump system for controlling the pitch of the blades. Not wanting to dis-assemble fully the unit while hanging over the stern at 15 knots, our first effort was to pour a tea kettle of hot water into the unit, to try to see if it would break up any salt buildup inside. It’s hard to tell if this worked or not, I think it did, somewhat. Sometimes this is the nature of repairs – you are not really sure if it worked, but it is logical to do it to help.

Through the night, we continued with one reef in the mainsail. I was a bit leery since there were patches of stronger wind forecast. And they came in the very early morning. I was awakened from a nap by the noise of a speed surge, saw the higher wind in the data, and hustled to get dressed to go on deck. It is cold enough now that you cannot chance the wrong clothes.

I went straight to furl the gennaker, and was able to get that finished just minutes before a 35 knot blast came through. I then reefed the mainsail again.

By this time it was getting light out.

Sailing on a course that would eventually intersect the Antarctic Exclusion Zone (where the racers are not allowed to go) we gybed about 30 miles short, and then were pleasantly surprised to see Alan Roura crossing us just ahead by about 10 miles. Alan and I have had several very nice emails recently. I tried to call him on the VHF Radio, but did not connect.