Last night I watched the barograph, tenth of millibar by tenth of millibar rise, but incredibly slowly because essentially we were going at the same speed as the storm, and couldn’t slow down and let it go away. But finally, after many hours, I fell asleep for a nap, and when I woke up, there was a similar crashing of the chaotic sea state, but less howling of the wind, and a look at the data log of windspeed for that hour or so that I was asleep showed that the speed had come down to 25 knots. 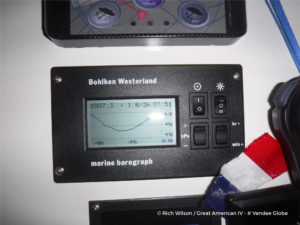 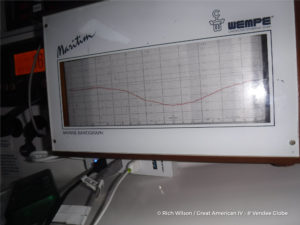 Through the morning, I watched and waited for it to return, but it didn’t. So eventually, we put up the staysail (J3), and then when the wind dropped some more, we did our downwind mainsail reef dance and headed up into the wind, and hoisted the mainsail to reef 2. Later we rolled up the staysail (J3) and rolled out the solent (J2). (Click for sail plans). The sea was still up, still 12-15 foot seas, hardly diminished because the 25 knots will sustain them quite a bit. And we took off on some scary surfs, which we are still doing now at dinner time, hitting 23/24/25 knots regularly. It scares me.

We did pass another milestone today, 90 degrees East longitude, halfway from the prime meridian to the international Date Line.

My friends here in the south have had some issues. Alan broke some rigging, Enda’s computer is out. Eric has sorted his engine. We’ve fixed our hydro leg problem, and the hydros, despite all the challenges of the internal hydraulic tubing, are hanging in there.