The Original Adventurer in our Family: My Mother, Dorothy Ann (Simpson) Wilson

Mom came from the Pacific Northwest, growing up in Tacoma, Washington. Her family were hard workers in a serious time, with World War I ending and the Great Depression coming on, yet always with a twinkle in their eyes. Within her Simpson family the story is well-known of the lady who drove off the street into the hedge in the front yard, distracted by the sign hung from the attic window by Mom’s youngest brother Rich: “Big fight tonight, Simpson’s basement!”

From that childhood home, she could see both to the summit of Mount Rainier, and to the waters of Puget Sound. Seeing a distant horizon, whether land or sea, invites us to imagine what lies beyond. Mom accepted that invitation, and went. 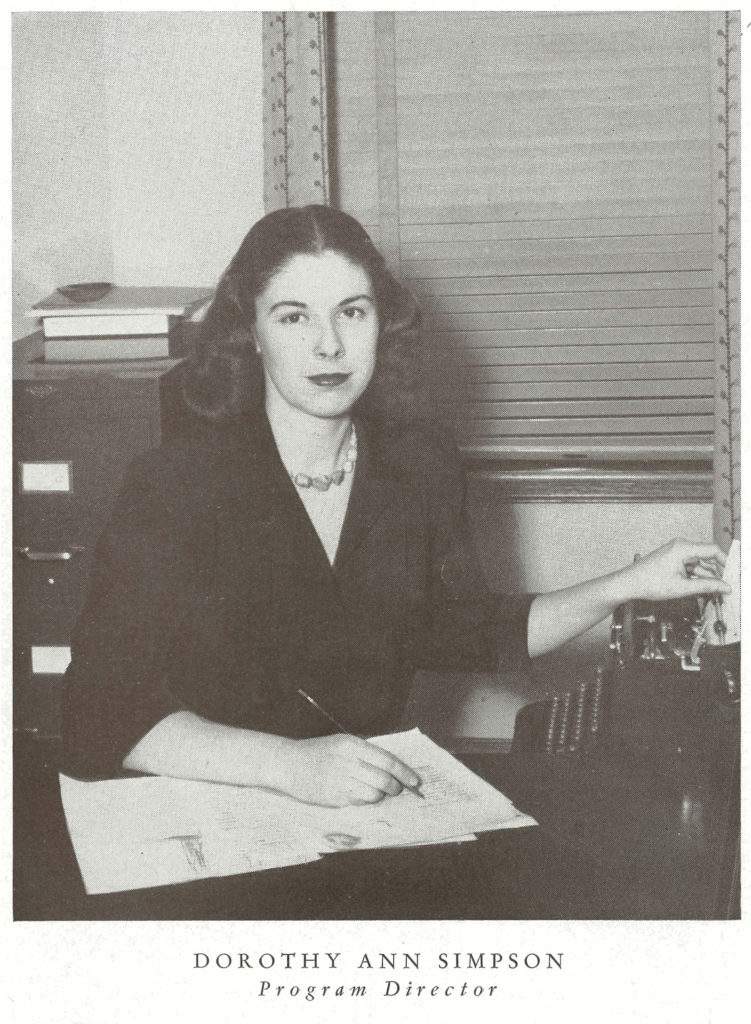 She brought that open spirit of the west coast, to her next frontier, Fairbanks, in the Alaskan Territory. Many regard Alaska, even today, as a frontier, but what could it have been like, 70 years ago, for a single woman, going to Fairbanks to work? Think of it, 64 degrees North latitude, a thousand miles further north than we are here in Marblehead, only 75,000 people in the Territory, and 70 years ago?! In Fairbanks, she helped build the first commercial radio station KFAR-660, which served as a crucial link of news and information to those living in the bush. She hosted a show called “Tundra Topics”, which is still broadcast today.

She told us stories from those days about the softball game that would begin at midnight on the summer solstice, and of reporting from the mail boat “Kusko” on its first run up the Yukon after the ice broke in the spring. She’d tell fondly of her roommate Carol, and chuckle at the nicknames that they had been tagged with, Carol becoming “Murgatroyd”, while Mom, our dear, elegant, dignified Mom, became “Spike”, after the similarities of their clothing to two cartoon characters.

In the middle of the war, she returned to Seattle to work at Todd Shipyard, assessing which type of steel was to be used in which part of the ships, and at war’s end she moved to New York to work as a copy editor, continuing to use her love of language, at Woman’s Day magazine.

Mom thought nothing of all this. She’d just quietly say “I was very lucky, I had wonderful opportunities”. She never took credit for having said “yes” to these opportunities, when many would have said “no”.

She met Dad on the plane from New York to Washington, D.C. She told of meeting an interesting, intelligent, handsome, and amusing man seated beside her. He, equally smitten, inquired to see her again. She felt compelled to say “no” due to the social customs of the day, they hadn’t been “properly introduced”, but finally she relented and suggested a cousin’s upcoming dinner party, effectively chaperoned. In the intervening days, Mom said, she became utterly distraught, utterly despairing, that this silly social stricture might have prevented her from getting to know this wonderful man. Thank goodness, for all of us, that Mom had broken that barrier of propriety, and invited Dad to that dinner.

Dad was accomplished. Mom was accomplished. And they lived as if rafted alongside, each the other’s anchor, enabling each other to live their best life. They travelled together, cruised aboard Holger Danske together, spent winters in Barbados together. It was a grand, interesting, and loving partnership.

After Dad died, Mom continued her living. Whereas Dad had liked to travel to Geneva or London, Mom now set out for her beckoning horizons, Moscow and Beijing, Bergen and Cairo, Delhi and Jakarta. Mom was truly the original adventurer in our family.

Back home, Mom made her mark quietly, among her friends, the friends of her friends, her family and their friends, and on and on. She touched so many people, with her warmth, her graciousness, her dignity. She continued with the community efforts that had been so important to them both, at MIT, at the BSO, at the Children’s Museum.

She once told me “interested is interesting”. And for her, it wasn’t a learned philosophy to be theoretically implemented, it was simply the way she was. She was interested in everybody. Everybody had a story, everybody was doing things, and she wanted to know about them, learn from them, and wanted them to be part of her life. She loved to meet new people. Even last week, when a new nurse came in, she looked right up with the biggest smile she could muster, to say “hello”, as much with her friendly and welcoming eyes, as with her voice.

The comments from others in these past few days are more eloquent than mine: “She found the good in everyone” “an amazing force” “a gift to have known her” “tough as nails and sweet as honey” “regal” “extraordinary, elegant, and wonderful” “we sat for 45 minutes and never stopped talking” “a graceful and quietly powerful presence” “a matriarch, an angel, and such a lady, I loved her” “I’m not sure they make them like that anymore.”

Tom Brokaw was correct, hers was “The Greatest Generation”, and we as a society will miss them dearly. They saw global conflict, and nations rise and fall, they travelled the world, sometimes unwillingly through war. They endured a Depression, saw astonishing changes in technologies, and in cultures, and in the end, they came home to quietly build communities, never thinking that they had done that much.

We were lucky to be able to bring Mom back to Marblehead, where she belonged. When she first came to see 8 Skinners Path, a year and a half ago, and looked out the window at the seagulls, at the little wooden Beetlecat “Pumpkin” moored just outside, at a lobsterman pulling traps, and at the blue sky silhouetting Abbott Hall, she pronounced simply: “It’s perfect.” 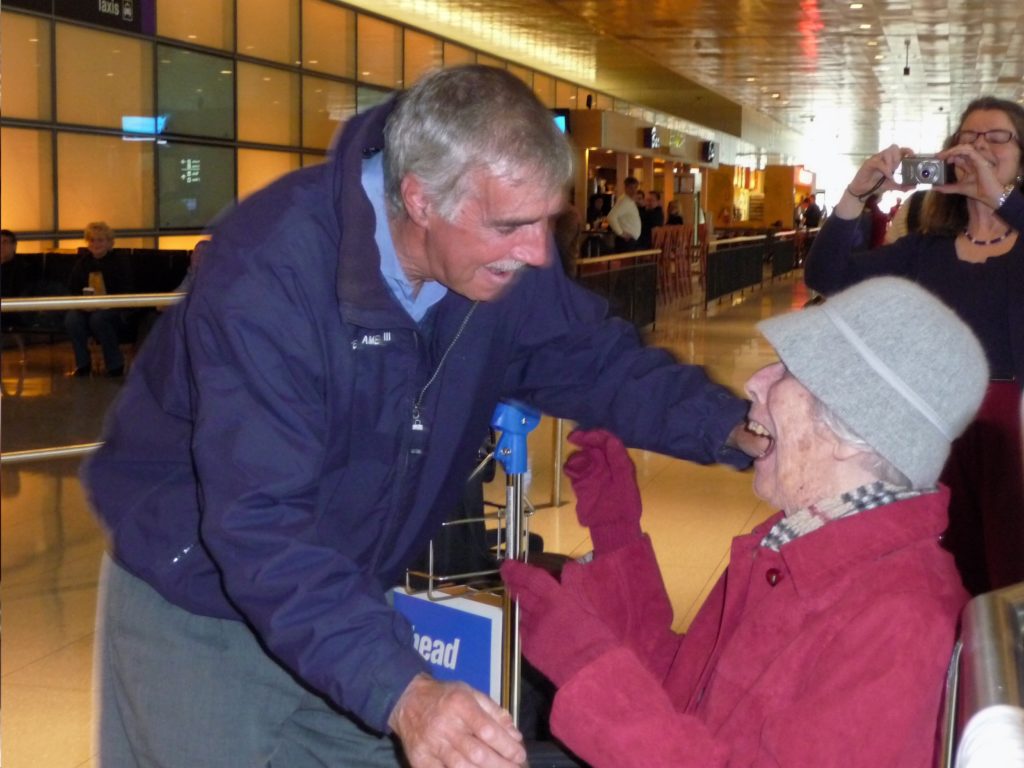 She would sit for hours watching the harbor activity, sometimes in her living room, often on her porch in the fresh harbor air. She was happily back in Marblehead, connected to her home and friends again.

This was a difficult year, seeing, up close and personal, Mom’s slow decline. Yet it was also a great year in that I had the wonderful chance to visit with her every day. We’d watch the cormorants diving, or a sailboat sailing, or a child swimming, and we’d chat. Friends would come to visit weekly, and she’d greet them with a smile and a “so, what are you up to?” And every month, inducing a burst of delight, her long-ago roommate from Fairbanks would call, “Hello, this is Murgatroyd, is Spike there?”

As this autumn advanced, we’d sit on the porch into the dark evening, both of us bundled up. I’d point out running lights turning red to green, she’d point out the launch bringing a load of people ashore, we’d look at Polaris that she’d seen so high overhead in Alaska. And she wouldn’t want to come indoors, because there was a horizon out there, there were people out there, and she was interested to know who they were, and what they were doing.