Can you tell us about the offshore traditions sailors like you have? 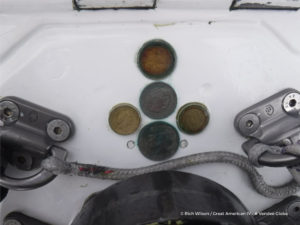 Dear Irapuato students: One tradition is to put a coin under the mast for good luck. I put five, in front of the mast! The first, leading the way, is the Sacagawea silver dollar. Sacagawea was the Indian woman who guided Lewis and Clark’s expedition to the northwest of our country. Then next is a Susan B. Anthony silver dollar. She was a leading suffragette for women to get the vote in our country. Since I was a Hillary Clinton fan, I thought it appropriate. Next is a John F. Kennedy 50 cent piece, since he was from my home state of Massachusetts, and was inspirational. Then we also have a 1 pound coin from Great Britain to honor our United Kingdom team of boat preparers, and a Euro because the race is French. I like our grouping of five coins.