Another difficult night. The long forecast front came through on schedule, for us about midnight. The wind would shift dramatically from Northwest to Southwest (approximately) with the only unknown being how strong the wind would be, and how rapid the directional change would be.

When it happened, it happened fast. The Wind had been at about 25 knots, and it went up to 41 knots (highest that I saw), and shifted very deliberately, so that our course (which was connected to the wind direction by the autopilot function) changed from an easterly course to a northerly course. 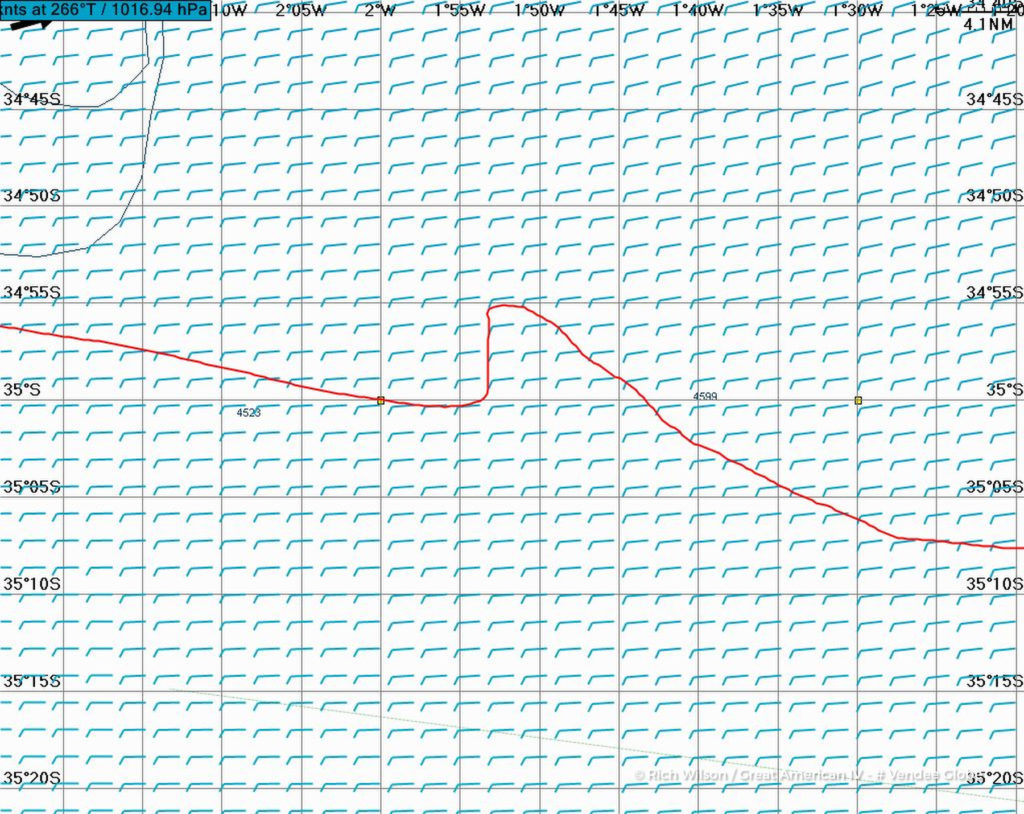 Our options were to tack or to gybe to get back to our southeast course. We chose the latter. These photos show our route and the data for True Wind Direction and True Wind Speed. (click each to enlarge).

After the gybe, the wind calmed to about 10 knots. Since we had 3 reefs, I hoisted the mainsail to 2 reefs, then unrolled the Solent jib, set up for the fractional gennaker, re-rolled the Solent, and unrolled the fractional gennaker. This was a nice combination, as the wind went back to 18/20 knots, and we headed off at anywhere from 12 knots to 19 knots. It was all erratic, but that’s what you get when you are that close to a big meteorological event.

I then went to sleep at the chart table. Hoisting that mainsail is a big job and I was tired. When I awoke, we were going along nicely, but we needed more sail, and over the course of the morning, I hoisted the mainsail to first reef, and then, after a granola breakfast, back up to full mainsail.

So my question for Dr. Barnewolt, or for Marti Shea, both on our Team of Experts: is there a point at which your muscles, biologically or chemically, will just stop and not do any more no matter how much your mind tells them to?