Last night we had a high speed power sail, still it seemed tacked onto the tail end of the previous storm. 25-30 knots of wind, 2 reefs in the mainsail, plus solent (J2), and with 25 knots of wind, we might surge to 22/23/24/25 knots of boat speed, simply thundering along, bouncing off waves, burying the bow on rare occasions, and logging miles.

There was nothing to do on deck, so I slept, with a batch of solid naps at the chart table. I had all sorts of clothes on – and then I would get into the 20 degree F sleeping bag. 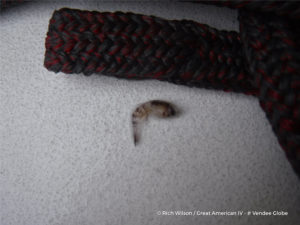 This morning the wind lightened just a bit and now we have the fractional gennaker up which is our smaller downwind sail. I’ve made a few repairs: tightening the bottom lashing on the fractional gennaker; covering the cam cleat for the mainsail halyard at the mast, since I sometimes had problems with the main halyard going in the cam cleat and then the sail would not come down; replacing the magnetic counter on the pedestal winch with a spare.

The Antarctica Exclusion Zone takes a turn East Northeast after the Kerguelen Islands. We are on that leg now. There is what seems a flat East-West section to the south of Cape Leeuwin at the southwest corner of Australia. This section was insisted upon by the Australian Search & Rescue department. Historically, the Australians have been the ones who needed to rescue various sailors in Vendée Globe or the BOC/Around Alone/5 Oceans races through the years, and their equipment is range constrained as one would expect. So they want the fleet within range as they go past to the south of Perth.

Another depression is behind us, yet the forecast is that we will get wind, likely 30 knots, but not the 50 knots of the previous one. We are moving now in between the two and hopefully can keep relatively in this position until we get to the flat spot in the AEZ, which is a bit further north, and maybe therefore would have less wind. It also appears that the severity of this next depression may diminish as it moves east, so it behooves us to go fast and get to the east.

We are sorry to hear of the dismasting of Stephane Le Diraison. His boat is the former Hugo Boss from Vendée Globe 2008 that was struck by a fishing boat 3 weeks before the start. Not sure if it was that incident, but at some point that mast was broken and then spliced back together by expert boatbuilders. We aren’t sure why the mast broke or where. But it’s evident that all the teams don’t have unlimited budgets to replace anything that might be suspect. But they make do with what they have, and they go to sea and race and voyage and live their dreams.