More Work on the Hydrogenerator

Another full day, and the days and nights run together in one long continuous cycle, so that sometimes its hard to remember what happened today and what happened yesterday.

After yesterday’s near catastrophe with the fractional gennaker in the white squall, I re-hoisted it this morning and went to unroll it. It unrolled halfway. Somehow, in the chaos of yesterday, some part of the roll caught on itself. I headed the boat into the wind to hope that it would shake itself free. It did, and unrolled, and then I could see that it was undamaged by yesterday. 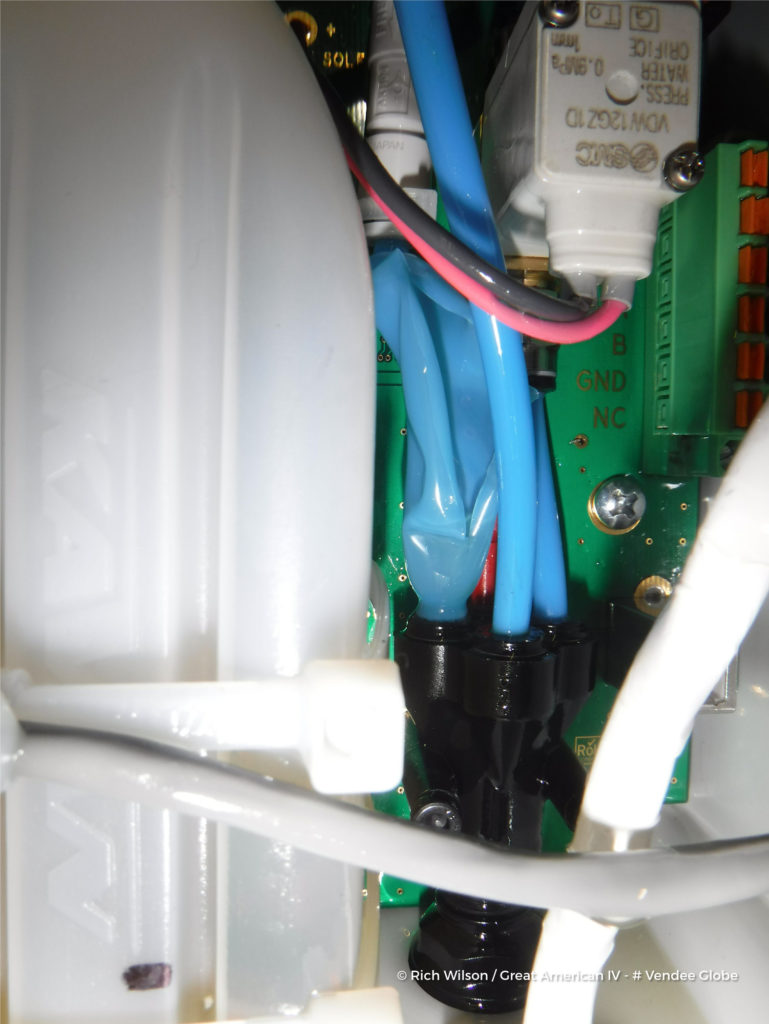 A big chunk of today was taken by the hydrogenerator pump box again, where another of the hydraulic lines had blown up and drained the tank of its hydraulic oil. We don’t know why, nor do the manufacturers. It took nearly 3 hours to replace the 2 inch section of tubing, and fill the tank. It works fortunately. However, our confidence is shaken. For some reason it seems as if we are working at a higher pressure than the design, for this to keep happening.

Late in the afternoon, the breeze picked up as the next depression approached. We furled the fractional gennaker, and thought, should we leave this up for when we next need it? Perhaps, but more seamanlike to lower it and put it away in the forepeak, so I did. Plus we added a cable that goes in the place of the genoa, and stabilizes the top of the mast. Then we went along with the solent and 2 reefs in the mainsail as the breeze built to 20 knots then to 25 knots. The boat was regularly going 18-20 knots, and in the higher winds, was laboring.

As a racer, I would continue pushing, but I think that now that the group has gone ahead, I am reverting to being a seamanlike mariner, more my natural conservative self, and so I put in the 3rd reef, and the boat continued at high speed, but without the laboring. This was better for the boat and for the skipper!