It was a long approach to Cape Horn, and then a long passage around Diego Ramirez Island and the continental shelf, and then a long gybe Northeast up the leeward edge of the shelf and then to arrive at the entrance to Straits Lemaire. Once through there, and suddenly in the lee of the continent, the seas smoothed, a sharp horizon appeared, the sky cleared to show blue among the clouds that had light rain, and there was a sun. It was like night and day.

Into the 18th, we went west of the Falklands Islands, behind Alan Roura, who had also transited Straits Lemaire. We had a day of sailing that reminded one of why we liked sailing in the first place. Fractional gennaker, staysail, one reef in the main, 15 knots of wind, 15 knots of boats peed, smooth seas, sharp horizon, crisp temperature, but not the bitter wet raw cold of the south.

We were visited by a British Hercules aircraft from the Falkland Islands, who called on VHF to alert us to their arrival. I got a nice video of them as they sped by – whoosh – circled and came up our wake and – whoosh – again. They were on routine patrol. 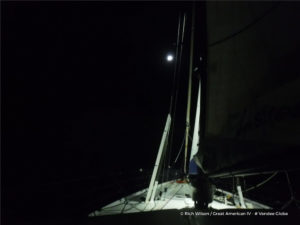 Into the night we had a few hours of very variable winds, 5-18 knots, wind direction moving 20 to 60 degrees. I finally gave up trying to chase the wind, and set the boat up for an average, and went below for a nap. When I came up at midnight on deck, amazing, there were stars out! And a moon! The moon was bright enough even though only half to light the horizon. I started jumping up and down in the cockpit and shouting at the stars from delight. I have a great star book by H. A. Rey, but had only had it out once, all the way across the Indian and Pacific Oceans, just once. We just had gray in the south, and no sun and no stars.

Today we are with full mainsail and solent (J2) and heading Northeast. Fabrice and Arnaud went east of the Falklands, and have pulled out more. Alan, who went west with me, is still about 100 nautical miles ahead. We are making about 12-14 knots, and about 20 degrees from our intended course of Northeast.