For a mariner, Crossing the Line is a special event, no matter how many times he or she may have done it before. North turns to South (or the reverse) on the GPS. The Line is not marked by buoys, only by signs (+ or -) in the spherical trigonometry of the planet.

New stars and constellations appear that cannot be seen from the other side of “The Line”. Polaris, our celestial anchor in the Northern Hemisphere, will disappear below the horizon in our wake when we cross heading south. 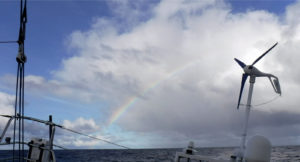 In a maritime tradition universally followed, those who have Crossed the Line must initiate those who have not. The ceremony is to degrade and interrogate as to whether they are worthy of entering King Neptune’s new domain, which must be respected. The Ancient Mariner offended King Neptune by shooting the Albatross, and brought disaster to his ship.

I have crossed the line eleven times under sail and once aboard cargo ship (New Zealand Pacific, after our rescue off Cape Horn in 1990). Even aboard The Big Red Lady (NZP’s affectionate nickname), merchant mariners who had not crossed were ceremoniously doused in bilge water and diesel sludge, demeaned, questioned, demeaned some more, and then permitted to cross. I was happy to see that these highly professional mariners still adhered to this tradition of the sea.

When we cross in a few days, I will wonder, as I did in 2008, what adventures, inspirations, calamities, marvels, and rigors will happen to us before we re-cross going North. We will have gales, we may see the Aurora Australis, we will suffer the cold and the fear, before rounding Cape Horn and heading north again. The South, how will we fare in the South? We will do our best; yet King Neptune will decide.