A Chat with the Brazilian Navy

In the night, we had a bird flying just overhead about 30′ up above the cockpit in the dark. I could just barely make out its shape, dark against dark. It was amazing that the bird would be able to see rigging, and avoid it. Some time later, I was in the cabin, and there was a mini-crash and a squawk on deck, and clearly the bird had hit something, perhaps a backstay, and fallen onto the deck, but quickly regained its senses and took off again. 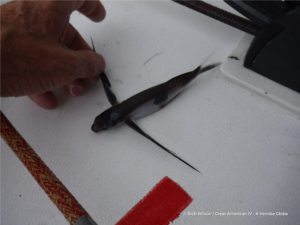 And on occasion, in the cabin, you hear a flying fish slam into the side of the boat.

This morning, while preparing to go forward to lower the genoa that we’ve had furled and up for a few days, on the advice of Joff Brown our boat captain, there was a call on the VHF. I’d seen a ship ahead of us by a few miles, but it did not coincide with an AIS position that we also had indicating to starboard. It turned out to be the Brazilian Navy with a few questions for us. We were about 320 nautical miles from the coast, which is more than most countries Economic Zones of 200 nm. They wanted to know the name of the vessel, where was our last port, what was our next port, how many crew aboard, and AIS number, and Registry of vessel. The ship that I had seen ahead of us, and actually I’d thought it looked like a Navy ship, turned toward us, and followed us for about a half hour after our conversation that was perfectly friendly. I explained about the Vendee Globe race. I think they were curious to see a sailboat going 14 knots. Anyway, an interesting encounter.

I’ve lowered our prayer flags from Scott Hamilton, as we want to make sure they are available to go north across the equator in a few months time.