Shipping is an unseen, yet essential, industry. Around 90% of the world’s goods are sent to their destinations by ship. On land, if you live near a port, you might see a few ships from time to time. At chokepoints for the movement of ships, Panama and Suez Canals, Straits of Malacca and Gibraltar, you can see many ships, of many types, densely packed. 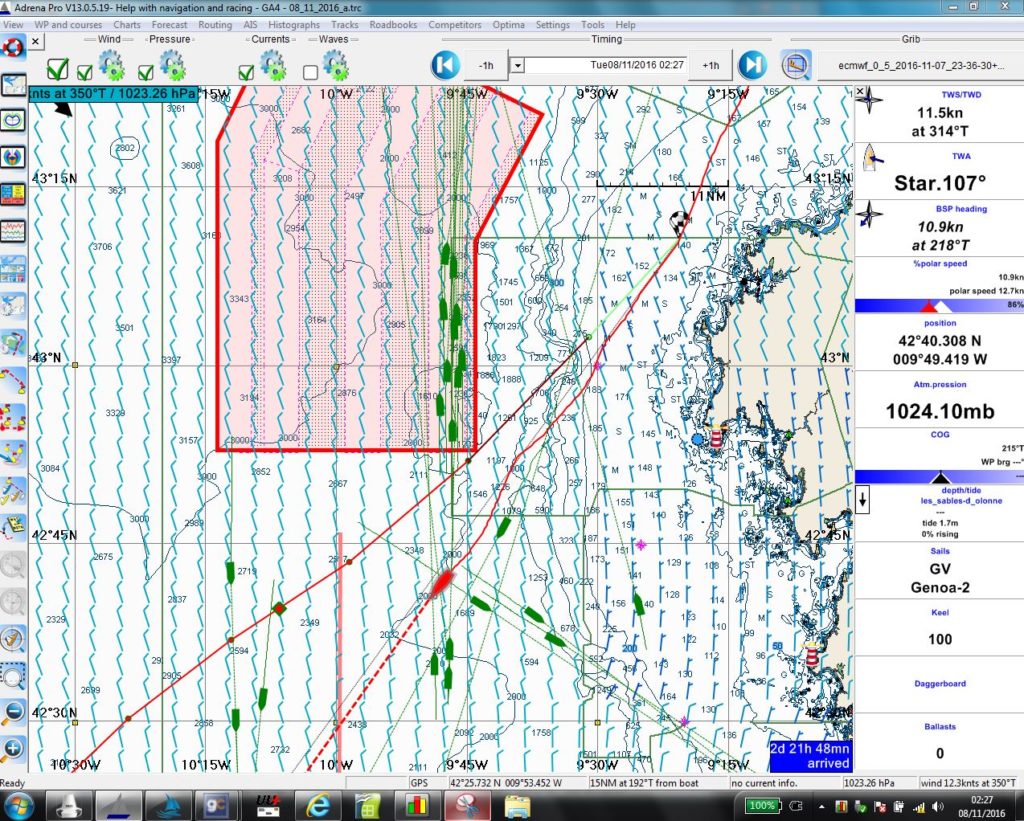 Cape Finisterre Traffic Separation Zone. Great American IV is the red boat heading southwest. Green are ships entering the northbound lane as identified by AIS. Ships do not appear in the other lanes because the range of AIS is not long enough for us to see them. Green boat behind Great American IV, also heading Southwest, is Alan Roura, Swiss skipper for Vendée Globe.

Last night, we passed Cape Finisterre (“end of the land”), at the northwest corner of Spain. Ships coming from South America, Africa, the Mediterranean Sea, and from Asia via the Panama Canal, that are going to ports in northern Europe, all come around this corner, in one direction or the other. This congestion presents a collision risk, and combined with the ferocity of winter storms in the Bay of Biscay, it was deemed important to organize ship passage around this sharp corner. Thus, like painted lines on a highway, the chart shows Traffic Separation Zones, and ships must go in their lane. There are four lanes, each is 4 miles wide, and the entire zone is 22 miles wide.

Ships are identified (by position, direction speed, and type) on our computer chart by AIS (Automatic Identification System). Last night I saw a tanker, a wheat carrier, a cruise ship, multiple container ships, and a general cargo ship.

Aboard New Zealand Pacific in 1990, after they rescued us off Cape Horn following our double capsize, we spent 18 days going to Vlissingen, Holland, and thus came around this corner (and into a Biscay gale!). The ship was the largest refrigerated container ship in the world at the time. The ship was fascinating in its technical complexity and the crew was astounding in their skill, diligence and hard work to keep that complex ship functioning properly in its hostile environment. And all unseen by people on land!

The next time you fill your tank with petrol carried by tanker from abroad, or have a sandwich with bread made from Australian wheat brought by bulker from down under, or slip on a pair of running shoes brought by containership from the Far East, think of those hardy souls aboard the ship who brought those to you, and thank them for their skill and expertise!